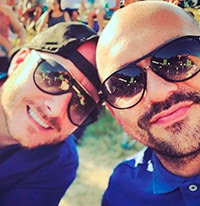 Michael and Wes: The Story of how we became daddies

A modern family: read about the experiences Was and Michael have had with surrogacy and egg donation in the UK on their journey to becoming parents.

We’re Michael and Wes, and along with Talulah who is 3 years old, and Duke who is 10 months old, we make up our little Modern Family.

I guess we’re a little different from most families, but the one thing we have in common is the desire to create a family, the love we hold for our children and the dreams we strive to make happen for them. We’d do anything for them, just like you would do for yours.

Our family was created via Surrogacy in the UK. Being two men, we needed two vital ingredients to complete our family: An Egg Donor and a Surrogate. We wanted a Gestational Surrogate (this is when the surrogate is purely a host and isn’t using her own eggs).

The outlook was positive but daunting. Finding all the relevant information was exhausting. It took months to compile and the materials often conflicted, for example costs often varied greatly, wait lists for available Surrogates varied from 6 months to 18 months, some websites were risk adverse, whereas others terrified you, hinting at International Surrogacy being the better option. We immersed ourselves into the Surrogacy world. In all, we spent around three years researching our options as we knew very little about UK Surrogacy, and in the beginning, we explored all the international options too.

Who “should go first”?

As Wes already had a daughter, choosing who ‘should go first’ wasn’t an issue for us, whereas some couples often have a battle making this important decision. It’s a conversation I’d suggest that you have in the early days as it can create some friction and even resentment, and so discussing this early on prepares you for the journey better. Being the non-biological parent for example may take some getting used to (pre-birth) or require additional counselling – more on that another time. Personally, leaving it up to the scientists seems the more sensible option: Use your best embryo first would be my advice, meaning having both intended fathers create embryos, as most like to, and then seeing which embryo has the best chance to become a live birth.

12 months waiting list for a surrogate in the UK

In the UK you can work with a Surrogacy Agency or a Not for Profit organisation. The waiting list to register was over 12 months back in 2014/15 when we began our journey, which was deflating, and we felt like we’d hit a brick wall. It was frustrating but we’d heard of the independent options available, so we stormed ahead chasing our dreams.

We joined a number of networking forums where Surrogates and Intended Parents chat online (Facebook groups) and over time build relationships/friendships. We couldn’t believe of this new world we’d discovered. Don’t get me wrong some of the groups weren’t for us, but we found a few communities that were very helpful, and we ended up making a tonne of new friends in the process. In fact, we’re in a number of the groups still to this day.

We met our Surrogate after around 6 weeks of being active in the Surrogacy groups, and we hit it off immediately. We were delighted, and we also realised we were very lucky – meeting someone this quickly who you just ‘click’ with is rare, but it worked.

Our Surrogate, Caroline, was married and had never been a Surrogate before, (which did make us nervous in the early days) but had four children of her own and had always yearned to help make another family.

Over the next 6 months, we met with Caroline regularly, went out for meals, weekends away, and spent time with all her family. The nerves in the early days had long gone by now and they were replaced with excitement.

Caroline was a ‘Gestational Surrogate’ which meant she wasn’t using her own eggs. She’d been sterilized after her fourth son and she would simply be a ‘host’ and keep our embryo safe for 9 months and then give us back our baby. Our preference was always a gestational carrier or host surrogate as we wanted to choose our egg donor separately.

The exciting next step was finding a clinic that worked for us all. We chose one that had a great LGBTQ Surrogacy programme and with a team that made us feel at ease. The next mission was asking the clinic to source us an egg donor that met our criteria. Most clinics have a waiting list for eggs, some over 8-10 months so bear this in mind.

Wes and I asked each other ‘If we could have children naturally, what would they look like?’ So, as we were using my gametes (sperm) first, we asked the clinic to match the donor to Wes. I’m dark, olive-skinned, and have hazel eyes. Wes has fair skin, blue eyes, and blonde/brown hair, so that was our criteria. We specified taller too, as we’re not so blessed in that area. This process was fascinating.

Here in the UK, Egg Donation is regulated by the HFEA and classed as ‘non-anonymous’, which means that we don’t see photographs of our donor, nor do we know who they are. We only get non-identifiable details such as eye, hair, skin tone, and BMI (body mass index) as a marker. When our children turn 18, they can request full details of the donor, should they want to.

During this process, it inspired me to also become a sperm donor as it only felt right. Someone was helping us create our family by donating their cells, so why wouldn’t I do the same? So, I did.

Getting closer and closer to our dream

After 6 months an egg donor was found, we were so excited – our journey was getting closer and closer – our dreams were now starting to materialise. Our Surrogate began hormone treatment, all our blood and semen analysis tests were completed, as was our counselling, which is a vital part of the process.

Our egg donor’s cycle was being stimulated by medication, and when her eggs were ready to be retrieved in the clinic I was invited to fertilise them and provide my sample. That fact that we were both in the clinic at the same time was crazy! Both anonymous to each other, we sat in different areas and our appointments were carefully timed. It was crazy and so fascinating to us that we were making a baby by science yet born from the same love and desire to parent.

Our donor didn’t produce many eggs, but this was expected. We were assured that the quality was excellent. We retrieved five eggs, my sperm was mixed with them, I was free to go home, and we’d then receive a daily call.

Congratulations, you’re going to be Daddies!

The lab updated us on the progress each morning, which was both nerve-wracking and exciting. We had fertilised five eggs in the lab and by day five of them being cultured, three were viable and excellent blastocysts. We were happy with that result.

One fresh embryo was transferred on the 13th of February 2016. What is meant to follow is two agonising weeks or the 2WW (two weeks wait). On day 10 our Surrogate took a pregnancy test and messaged us asking if we could speak. We were concerned as she sounded urgent. We answered the call and she simply said ‘Congratulations, you’re going to be Daddies! We cried, we hugged, and we cried some more. We were pregnant!

We had an amazing pregnancy, and 9 months later on the 16th of October 2016 at 6 am our lives changed forever – Talulah was born weighing 8lb exactly. Nothing prepares you for the wave of emotion and overwhelming love. I remember in the car driving back with her in the car seat, just crying totally overwhelmed that we’d created this beautiful tiny human. I couldn’t stop staring at her and stroking her tiny face.

The sibling journey and getting back on track

First of all, we needed to find an egg donor as our previous donor couldn’t donate again for us, due to health complications. We wished we’d both fertilised the eggs back in 2016 – but hindsight is a wonderful thing.

The clinic found us a new donor this time matching to my physical characteristics. , but this donor had unproven fertility, meaning that they hadn’t worked with her previously.

In June 2018 we had a failed transfer, which was heart-breaking. We hadn’t prepared ourselves for it not working. We’d just assumed we’d be lucky again and naively just expected it to work, which we know now is not always the case. That said, with same-sex surrogacy almost all of the time you’re not dealing with infertility issues – eggs are under 35 years old, both men are fertile, and the Surrogate has a proven history of being able to carry safely. So, transfers working the first time are quite common and we just expected it again.

At this point, we had a little break to get our thoughts and emotions on track. Furthermore, we had to save for a new round of treatment. It hit us harder than we thought, and we just needed to connect again, as fertility treatment is so consuming.

This time we took a slightly different route. A friend offered to donate her eggs to us. She was also a Fertility Nurse and a real ambassador for Surrogacy too. We were beyond thrilled and because of her, we started treatment again in December 2018.

We managed to get eight eggs retrieved this time, and by day five we had six blastocysts which we feel was an amazing result. We transferred a single embryo in mid-December, and on the 31st of December our two-week wait was up and our incredible surrogate tested again for us…we were pregnant! We were over the moon and could celebrate New Year knowing we had one hurdle completed. We were ready to take on 2019 and growing our tribe a little more.

This time, our incredible, selfless surrogate was carrying Wes’ biological child who would turn out to be our incredible Son. Again, the pregnancy moved along without any major issues, which we were grateful of. Duke was born on the 20th of August 2019, at 9:16 am weighing 7.2 lbs. Again, I cried more happy tears. You can read about the birth here on our blog.

Our Surrogate’s goal of creating and completing a family had been achieved. 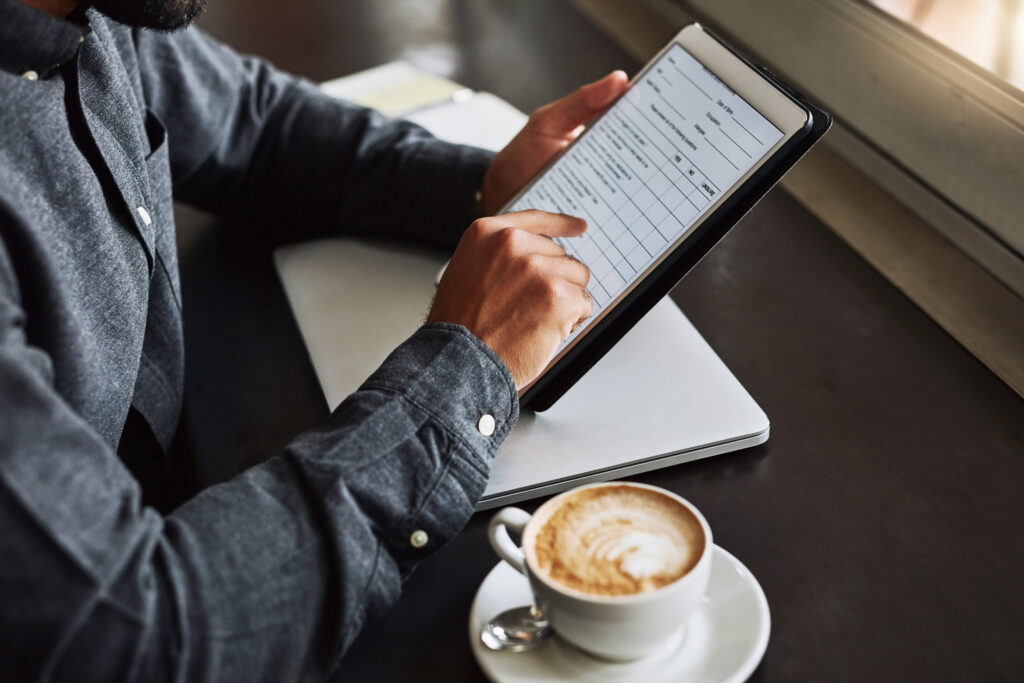